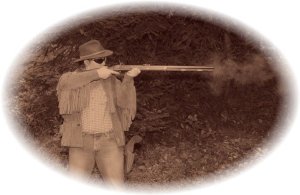 Let’s talk about guns! I have been shooting since I was sixteen. I’ve participated in competitions and I am trained as an NRA rifle instructor. I love doing reenactments. For my high school graduation, I asked for a black powder rifle. Are we getting the picture? Haha!

First of all, let’s discuss the uniform worn by an enlisted man in an artillery unit:

The distinguishing factor of artillery uniforms were the red stripes, clearly seen above. Not all enlisted men were issued with swords, I should make that clear. This is the uniform for an enlisted corporal. Most often, enlisted men wore a type of shoe called a brogan.  It was essential for men who were marching on a regular basis to have a comfortable shoe and dry socks. Towards the end of the war, many Confederate soldiers went without shoes and suffered greatly.

Right, on to the firearms! The rifles typically issued to infantry men were the Springfield Model 1861. This was the most widely used rifle/musket during the war. It weighed approximately nine pounds and was favored for its accuracy, range, and reliability. It was the first rifle with iron sights and fired a .58 caliber lead ball. This particular rifle was fired using percussion caps, as opposed to the flintlock rifles of earlier times.

I want to explain a bit about the firing mechanism because it was unique for its time. Infantrymen were issued with ammunition in the form of paper capsules containing the ball and measured powder. This enabled quick loading and firing. A percussion cap was issued separately. The soldier would insert the ball/powder into the barrel of the rifle and tamp it down with a ramrod. A cap would be placed over the nipple and the hammer cocked. The trigger would be squeezed and the hammer would fall on the cap igniting a spark which traveled down the small hole in the nipple, igniting the powder and firing off the round. Following me so far?

This streamlined the process needed to fire a rifle. In early wars, the shooter would have to measure powder, pour it down the barrel, place a cloth patch and ball in the muzzle, tamp it down with the ramrod, cock the hammer and hope the flint ignited the powder.

What about cannons? Both sides mainly used what is called a Model 1857 12-pounder Napoleon Field Gun. The Union Army produced approximately 1,156 of these cannons during the course of the war. Each cannon was run by a team of seven men who, when properly trained, could get off four, 12-pound ball shots in under a minute. The range of these cannons was approximately 1400 yards at 1440 feet per second! When fired all together, the impact of these weapons was completely devastating.

The cannons could fire a variety of projectiles, from the basic round cannonball to a canister shot that would break apart, sending shrapnel through the air and into the opposing side. The Napoleon was the last smooth bore cannon adopted by the U.S. military. After the Civil War, they opted to use rifled barrels for greater accuracy.

A cannon worked much the same as a black powder rifle, but in bigger form. Young boys called “powder monkeys” would run between the artillery lines, making sure there was enough powder to keep the cannon going. Although mainly stationed on ships, they were also in the field. It was a dangerous job as any spark could ignite the powder.

There were many more weapons used during the American Civil War, but all had the same goal: to cause the most damage to the opposing side. With the advances in artillery and firearm technology, it is no wonder that the Civil War was the bloodiest of all American wars.

I hope you enjoyed the brief lesson on artillery!

Kind thanks to the following sources: