Today, in conjunction with Iron Claude Author Services, I am proud to present a feature post on RC Boldt, the author of the Teach Me series!

RC Boldt is the wife of Mr. Boldt, a retired Navy Chief, mother of Little Miss Boldt, and former teacher of many students. She currently lives on the southeastern coast of North Carolina, enjoys long walks on the beach, running, reading, people watching, and singing karaoke. If you’re in the mood for some killer homemade mojitos, can’t recall the lyrics to a particular 80’s song, or just need to hang around a nonconformist who will do almost anything for a laugh, she’s your girl.

You can find her at the following social media links: 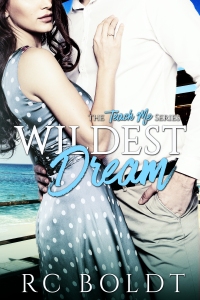 Blurb:
The Teach Me series starts off with the story of Raine and Mac, the most unlikely of best friends…

Taken from his parents and bounced from one foster home to the next, former Navy SEAL turned math teacher, Callum “Mac” Mackenzie had a rough childhood. The only time he’s let himself get attached to anyone has been with his military “brothers”. He’s convinced he doesn’t know how to love and certainly doesn’t “do” relationships. He’s spent fourteen years in the Navy and now he gets to live out his other dream: teaching.

Her thirtieth birthday fast approaching, science teacher, Raine Thompson feels as if her time to find “the one” is running out. She knows life is short, especially after dealing with breast cancer two years ago, and wants to experience her own happily ever after. But is it in the cards for her?

Finally acting on the simmering attraction they have long ignored, Raine and Mac decide to have a fling and they discover what it’s like to have someone who knows you inside out also be the one who makes your body come alive.

But it was only temporary…

He turned his head to see her in profile as she was lying there, staring up at the slivers of moonlight and shadows on the ceiling. Mac wasn’t sure what made him do it but he slid his hand over almost hesitantly, his fingers linking with hers. He watched as she turned her head to look at him, an easy smile coming over her face.

“So,” he echoed, returning her smile. Lying there with her, her hand in his, with that trademark smile on him, he felt like his heart staggered a bit in that moment.

Mentally shrugging it off, he spoke. “That was . . .” he trailed off, trying to find the right words.

The smile slipped off his face as he stared at her. “Really, Thompson? That’s how you’re going to be?”

Raine shrugged nonchalantly and gave a dramatic sigh, turning away as if to get up. “Well, I’ll be going, now.”

He rolled to his side, his arm snaking out and grabbing her, pulling her back flush against his front. “Oh, no you don’t, missy,” he growled. “Not before giving me a chance to redeem myself. It’s only fair,” he said, smiling into her hair.

“Well, if I must,” she sighed despondently and wiggled against him as if to get more comfortable. He felt himself start to harden in response to her movement.

“Oooh. Somebody’s ready for round two already?” she remarked. “Too bad I’m too tired,” she yawned loudly. A very fake yawn.

He couldn’t help but laugh. “Woman, you should know better than to provoke me.”

“Oh, yeah? You planning to punish me?” she teased.

He slid his hand up over her hip and down to the center of her thighs. Her legs parted easily for him as he glided his fingers over her to slide one inside with ease. The sound of her quick inhalation made him grin.

“I think I’m rather fond of your punishment,” Raine told him breathlessly.

If he were to judge by the way she came apart in his arms after that as well as the other three times throughout the night, he would have to agree with her. 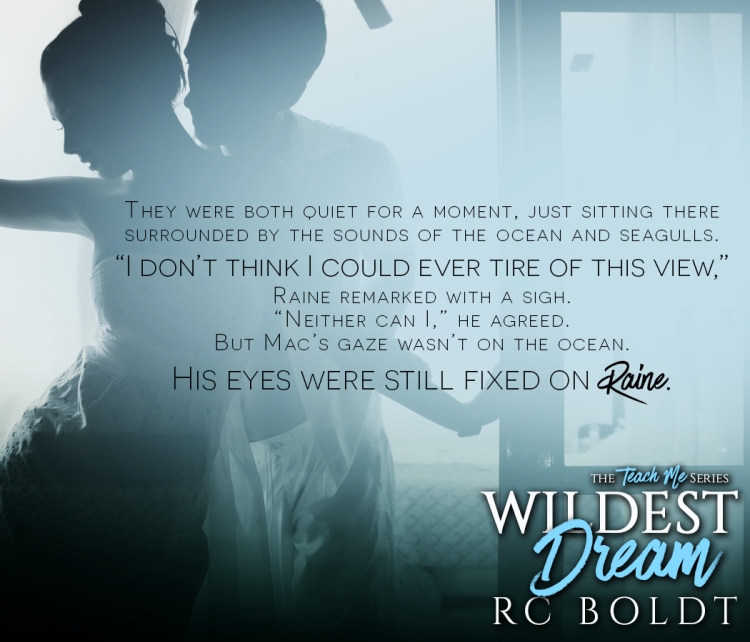 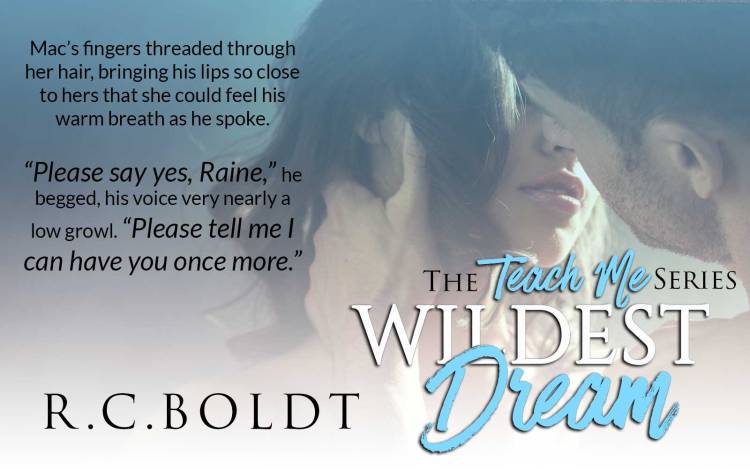 Blurb:
RC Boldt’s Teach Me series gives us a closer look at just how thin the line is between love and hate…

Fifth grade social studies teacher, Laney Kavanaugh, is no stranger to being left behind – her father taught her that at a young age. That’s why she always has her eyes wide open when it comes to men. She’s determined she will never again be the one left behind. She doesn’t let sex blur what they’re really doing; it’s always just sex.

Zachariah Mayson, fifth grade writing and English teacher, has been the bane of Laney’s existence from the moment they met at their shared elementary school. She can’t stand him. He gets under her skin like no other and is always utterly obnoxious in his attempts–and successes–in getting a rise out of her.

The night of their friends’ wedding, Laney gives in to a moment of melancholy, knowing she’ll never be able to let her guard down enough to let a guy close, let alone someday get married. She and Zach end up having the hottest night she’d ever experienced, showing her another side of him, a softer, sweeter one he’d hidden from her until now. Because now, he hoped she was finally ready to “see” him.

But when you’ve always guarded yourself against falling in love, can you let go of the past in order to embrace the future?

“What the hell do you—” He stopped mid-rant as his eyes fell on who was standing on his doorstep.

Laney looked mad as hell … and never more beautiful. With anger flashing in her hazel eyes and lips pressed thin, red and kissable. And that dress she wore? Oh, hell. It had taunted him the entire time they had been at The Turtle. Just for the simple fact that it accentuated the curves on the body he’d had his hands on, mouth on, lips on just a few days prior.

“What the hell do I want, you ask?” she snarled at him as she shoved past him to enter the house, pushing the door shut behind her with a loud thunk. “Oh, I’m so glad you asked. I want to know what the hell was with that gift. The one you shoved at me.” Her volume increased, her words forceful, demanding. “Why did you give me that gift?”

She was upset because he gave her a nice gift? Fuck that.

“Because it made me think of you!” he practically screamed. He watched Laney’s eyes go wide, lips parting in shock or disbelief, he wasn’t sure which. They stood there, staring at each other, fiery gazes clashing.

He wasn’t sure who moved first, but one minute they were having their angry standoff and the next, their bodies collided, lips meeting in a kiss filled with a fierceness, tongues warring. Knocking into the wall before he righted them as they pulled off articles of clothing, they made their way down the hallway to his room. Leaving a trail of her flip flops, sweater, dress, panties, bra, and his pants in their wake, they made it to his bedroom.

Zach pulled his lips from hers. “Just one night, again, Kavanaugh?” He heard the slight bite in his tone.

Her eyes searching his, she quietly answered, “Just one night. Again.”

Hearing her repeat the words, he felt like there was a massive weight on his chest, making it difficult to breath.

Oh, he would give her one night, all right.

His mouth slammed down on hers, devouring her, tasting her deeply. Having her curves pressed against him made him nearly weak in the knees at how right it felt to have her in his arms.

It’s only for one more night.

Those words haunted him and he slid his fingers into her hair, tugging her head back to tilt it, moving his lips to her throat. 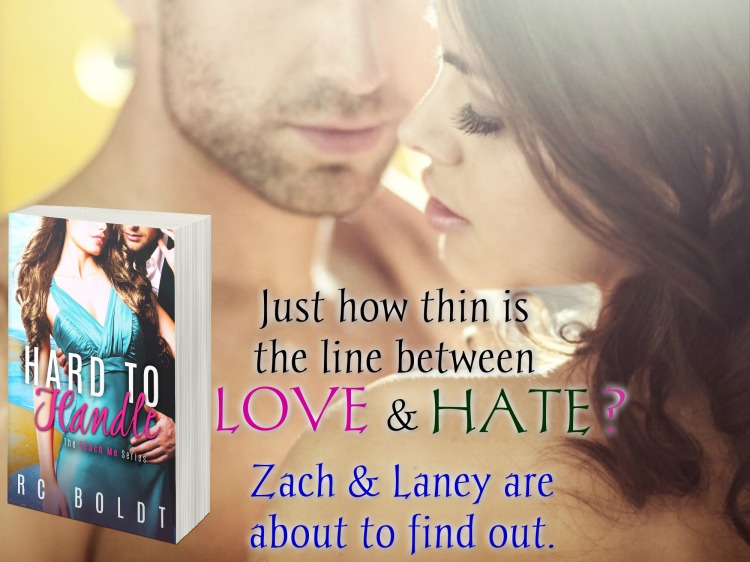