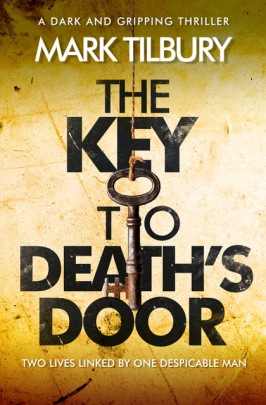 Title: The Key to Death’s Door

If you could discover the murderous truth of a past life and seek justice in this one, would you?

Teenager Lee Hunter doesn’t have a choice when he nearly drowns after spending the night at a derelict boathouse with his best friend, Charlie Finch. After leaving his body and meeting a mysterious light that lets him to go back to the past, Lee finds himself reliving the final days of another life. A life that ended tragically.

After recovering from his near death experience, Lee begins to realise that he is part of two lives linked by the despicable actions of one man.

Struggling against impossible odds, Lee and Charlie set out to bring this man to justice.

Will Lee be able to unlock the past and bring justice to the future?

The Key to Death’s Door is a story of sacrifice, friendship, loyalty and murder.

I’ve been following Mark Tilbury since The Revelation Room, and his novels only seem to be getting creepier and creepier, which isn’t necessarily a bad thing! Again, as with Abattoir of Dreams, Tilbury explores the supernatural (definitely his forte in the crime/thriller genre). Tilbury’s descriptions are so vivid, you almost can picture yourself there. I found it hard to put this book down, and then again, there were parts where I HAD to put it down, almost too terrified to pick it up again, hoping things would all work out for the best. No spoilers, but this is definitely on my top reads this year, and I can’t wait to see what disturbing tale he comes up with next.

Mark lives in a small village in the lovely county of Cumbria, although his books are set in Oxfordshire where he was born and raised.

After serving in the Royal Navy and raising his two daughters after being widowed, Mark finally took the plunge and self-published two books on Amazon, The Revelation Room and The Eyes of the Accused.

He’s always had a keen interest in writing, and is extremely proud to have his fifth novel, The Key to Death’s Door published along with The Liar’s Promise, The Abattoir of Dreams, and The Ben Whittle Investigations relaunched, by Bloodhound Books.

When he’s not writing, Mark can be found trying and failing to master blues guitar, and taking walks around the beautiful county of Cumbria.