I am so pleased I was asked to host as a part of this blog tour for Mark’s release! As many of you know, I’ve been a fan for some time, and oh boy, this one does not disappoint. I honestly think it is his best so far, right next to Abattoir of Dreams. In any case, without further ado…A Prayer for the Broken! 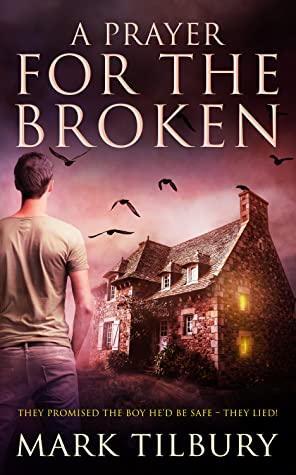 Title: A Prayer for the Broken

Blurb: When eleven-year-old John McCormack’s mother is murdered, he is placed in the care of Pastor Ian Stone and his family. Clearwater House is a far cry from the squalid flats he’s been used to, but John soon learns that Pastor Stone’s perverted form of religion is anything but compassionate. As Stone attempts to purify John’s soul of “dangerous levels of toxicity”, it becomes increasingly clear he’s at the mercy of a madman.

Who can John talk to when no one wants to listen?
Who can he trust when all he knows is betrayal?

A Prayer for the Broken is the story of one child’s desperate fight to escape a sadistic killer who has complete control over him.

It is with no massive surprised that a Tilbury novel hits the five star mark (no pun intended) for me. However, if I could award higher than five stars for this brilliant thriller, I would. No, I’m not gushing (okay, maybe a little). From the first page, I was hooked, unable to extract myself from the bath (yes, I read in the bath) until I finished every last page. By the end, I was shaking, terrified, hopeful, and found myself thinking about the book long after it had finished. This is, without a doubt, one of my top two Tilbury novels to date. Hear that, Mark? You’re challenged to utterly FLOOR me next time. Five enthusiastic stars from this reader!

About the Author (haha, I still have your picture saved):

Mark lives in a small village in the lovely county of Cumbria, although his books are set in Oxfordshire where he was born and raised. After being widowed and raising his two daughters, Mark finally took the plunge and self-published two books on Amazon, The Revelation Room and The Eyes of the Accused.

He’s always had a keen interest in writing, and is extremely proud to have had seven novels published by Bloodhound Books. Now self-publishing, Mark has published The Last One To See Her and his most recent book, A Prayer For The Broken. When he’s not writing, Mark can be found playing guitar, reading and walking.