This post is part of a virtual book tour organized by Goddess Fish Promotions. Darcy Burke will be awarding an ebook copy of book 1 of the Phoenix Club series, IMPROPER, to a randomly drawn winner via rafflecopter during the tour. Click on the tour banner to see the other stops on the tour. 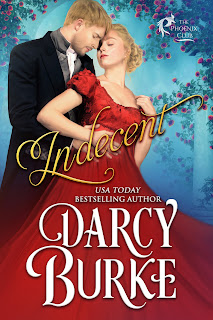 If Bennet St. James, the Viscount Glastonbury, doesn’t find a bride with a sizeable dowry, he’ll be in the poorhouse along with his interminable number of female relatives—all of whom he loves but are a drain on the negative fortune his father left when he died of a broken pocketbook. Desperate, he hatches a scheme to snare an heiress only to be foiled by a most vexing and alluring—and unfortunately equally destitute—paid companion.

Lady’s companion Prudence Lancaster is single-minded about finding her mother and filling in the missing pieces of her life. But a villainous viscount interrupts her plans, and his surprising charm and understanding tempts her in the most indecent ways. Soon, she’s dreaming of the future instead of wallowing in the past.

But when Bennet shares a dark secret, her hopes are dashed. For he won’t break the promise he made to his family, even if it means losing the greatest love he’s ever known.

Prudence sank down beside him on his injured side. “Does it hurt?”

“Did you lose consciousness?” she asked. “You didn’t move for a moment.”

His brow furrowed, then he winced. “I don’t think so, but I’m not sure. Everything happened so fast. All I could see was that branch coming straight down toward you. If anything had happened to you…” He closed his eyes and pressed his lips together until they whitened.

“Nothing happened, save my sudden need for a bath.”

He laughed and winced again.

“No more laughing,” she admonished.

“Then stop being witty and charming.” He opened one eye. “If you can, which I daresay you can’t.”

“Nonsense. I’ll be ruthless in my care of you.”

His other eye opened, and he regarded her with a heat that shocked and thrilled her. “Promise?” 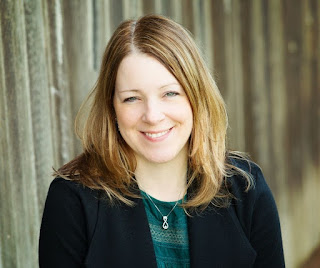 Darcy Burke is the USA Today Bestselling Author of sexy, emotional historical and contemporary romance. Darcy wrote her first book at age 11, a happily ever after about a swan addicted to magic and the female swan who loved him, with exceedingly poor illustrations.

A native Oregonian, Darcy lives on the edge of wine country with her guitar-strumming husband, artist daughter, and imaginative son who will almost certainly out-write her one day (that may be tomorrow).

They’re a crazy cat family with two Bengal cats, a small, fame-seeking cat named after a fruit, an older rescue Maine Coon with attitude to spare, and a collection of neighbor cats who hang out on the deck and occasionally venture inside. You can find Darcy at a winery, in her comfy writing chair, or binge-watching TV with the family.

Her happy places are Disneyland, Labor Day weekend at the Gorge, Denmark, and anywhere in the UK—so long as her family is there too.

One thought on “Book Blast: Indecent by Darcy Burke”