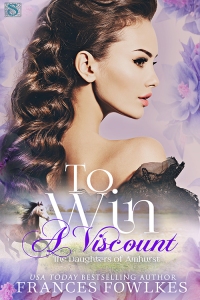 Title: To Win a Viscount (Daughters of Amhurst #2)

England, 1820. To gain a certain marquess’s notice, Lady Albina Beauchamp aims to win the derby. What she hadn’t planned for is the price handsome Mr. Edmund White asks in payment to train her to race: each lesson for a kiss.

Lady Albina Beauchamp is in love with the Marquess of Satterfield. Unfortunately, his only interest is in horses, and doesn’t know she exists. But when the marquess confesses he will bestow his undying admiration on the jockey racing the winning horse at Emberton Derby, Albina sets out to win his affections by training to race.

Mr. Edmund White is a master groomsmen for the Earl of Amhurst in line for a viscountcy, should he abandon his passion for horses and become a respectable sheep owner. But horses are his love–until he meets Lady Albina and her silly notions of racing. When she affirms she will enter the derby with or without his assistance, Edmund not only instructs his student in racing, but seduction as well.

For Albina, a first place finish isn’t the only thing at stake. She must decide whether to take her place in society…or follow her heart and love a groom.

The enchanting, but very puzzling Lady Albina stared at him. “Do you intend to walk the two miles out to the bluff or will you saddle a horse and ride, Mr. White?”

He pulled his gaze away from her buckskin-encased thighs and shook himself out of his reverie. “Ride, yes,” he said, still in a daze.

Her cheeks flushed pink. “Then please saddle your selection. I don’t have much time.”

Neither did he. Edmund had horses to groom, train, and run. Evaluating the riding technique of a bored lady had not been on his morning agenda. Which was why he made his way back into the barn and saddled the spirited bay mare the earl had only recently acquired. He had to run the horse anyway. Why not kill two birds with one stone?

Edmund adjusted the leather bridle and gripped the thick lead, guiding the steed into the morning sun.

Lady Albina’s face brightened at his approach. “Shall we make a wager, Mr. White? Your mare against mine? The first one to the bluff wins?”

“And what would the prize be, my lady?” He could think of more than one thing he’d very much like to win, like a long, slow kiss on her set of full, pink lips.

“Your full recommendation to the earl about my racng capability, when I arrive on the bluff a minute before you.”

“And when I pass your mare and end up the victor?” he asked. “What shall I win?”

She nibbled on her lip, drawing the supple flesh between her teeth and making his position on the horse a very uncomfortable one. “I named my terms. It seems only fair you should do the same.”

Naïve, then. She was definitely naïve. And he had no qualms exploiting the fact. “A kiss. On my lips. From yours.”

Her eyes widened, her porcelain skin flushing scarlet. He could almost hear her inner voice willing her to object his bold request, but she squeaked out a definite affirmation. “Done. On the count of three, we race to the bluff.”

His blood warmed, and nothing, he was certain, but God himself could prevent him from claiming his prize.

She brought her mare alongside his, a hint of uncertainty passing over her delicate features. “I expect nothing less than honest sportsmanship.”

“And I expect nothing less than a good race, my lady.” He settled into the stirrups and gave her his best rakish smile. “One…two…”

His words were drowned out by the clomping of hooves and Lady Albina’s high-pitched laughter.

“I am not the one claiming the prize, Mr. White. Should you wish to…kiss me, you must…press your lips against mine.” Good heavens, she’d never been so mortified. All this talk about kissing took the very romance out of the notion. But then, this kiss was not a romantic intimacy. It was a business transaction. A payment for her incompetency.

“Your lips. On mine. That was the agreed-upon arrangement.” He crossed his arms in front of his chest and lifted his chin.

“I do not see how it makes any difference,” she said with a huff. “A kiss is a kiss. It does not matter who initiates the act so long as it is given.”

“I am afraid I must disagree. Whoever initiates the act sets the tone for the event, thereby altering the effects.”

Albina rolled her eyes. “It is but a pressing of one’s lips to another’s. And that, only for a moment. I sincerely doubt one person’s initiation of the event is different from anyone else’s.”

“Would you care to test your theory?”

She leveled a glare in his direction. “How so?”

“You kiss me,” he said, his voice low. “And we assess the results. Then I kiss you and we compare the experience.”

She narrowed her eyes. “You wish to kiss me twice?”

“No, I wish to kiss you once, for I claim ownership of the kiss when I initiate the act. Likewise, you would kiss me once when you settle your accounts and do as you have already agreed by settling your lips against mine. I should think it a small price to pay for the sake of an argument, really. And, as you said, it is but a pressing of one’s lips to another. For but a moment.”

Albina rolled her lips inward and took a deep breath. One kiss had slipped into two. And under the guise of settling an argument she had unknowingly started. But a kiss was no more than what she claimed. A simple act. Nothing more than a settling of accounts.

She let out the breath she had been holding and nodded. “If my compliance allows for my continual access and use of the earl’s Thoroughbreds, I agree.”

“My lady.” Mr. White’s exasperated voice called from behind her. “I only seek to help you.”

Albina turned around, her chin lifted, her plaited hair licking past her arm. “Then do so, Mr. White. Tell me how to correct my form without insulting me. Unless you cannot. In which case, I shall seek out assistance elsewhere.”

He ran up to her and took hold of her hand, pulling her into his chest. Her hat fell to the ground as she crumpled against him, her right hand gripping his arm to steady herself. A thick, hard, and solid arm.

He lowered his head, his mouth mere inches from hers. “Your head should be flush with the horse’s.” His words were breathy and low, spoken in a rich tenor she could hardly hear over the hammering of her heart.

“My head,” she whispered. Her thoughts were no longer on her form, but the pair of lips hovering over hers.

“Place it alongside the mare’s, low and even, as though you see and hear as one.”

“See and hear as one,” she repeated, her voice far throatier than it ought to be.

“And your legs,” he continued, “should be tight against her sides.” His hands fell to her outer thighs. With a slight push, he clamped her legs around his. “Like this.”

God in heaven. She couldn’t think. At least not of anything beyond the pair of hands resting on her thighs. She gave a slight nod and licked her lips.

He inhaled, an audible, sharp intake of breath. His hands should not have been anywhere on her person. No gentleman would hold her thus, with such bold possession. But Mr. White was not a gentleman. He was a groom.

And she was, for the first time, glad for it. A heady rush of excitement coursed through her.

Slow and sensual, his lips curled. “Your bottom.” His hands slipped to her backside and cupped her supple flesh through the thin leather of her breeches. “It needs to be held high in the air.”

“M-m-my, my bottom,” she stuttered, lapsing into a mode of speech most often associated with her sister, Henrietta. “Must b-b-be higher,” she ended on a gasp.

Her breath caught, his fingers burning on her bottom as though they were on fire. No man had ever dared, never imagined to place his hands upon her…certainly not the marquess, who, as a titled peer, would respect the rules of decorum and treat her as a lady. As he ought.

Yet…she could not deny the surge of pleasure rushing through her at Mr. White’s forwardness. His blatant disregard for propriety was intoxicating. A shot of rebellion that echoed her own. Her rule-breaking, however, was limited to assuming the appearance of the opposite sex. A simple portrayal. A minor deception, though it was quickly becoming more. She had allowed him to kiss her yesterday. Today…today she was allowing him a firm grasp of her bottom. And what’s more, enjoying every second of it.

After viewing her all-time favorite love story, “Anne of Green Gables”, at the impressionable age of ten, Frances Fowlkes has been obsessed with affable boy-next door heroes, red-heads, and romance stories with lots of “highfaluting mumbo jumbo” written within their pages. It only seems natural then that she married the boy who used to pull on her curls in her high school English class, had not one, but THREE red-headed boys, and penned multiple love stories with bits of flowery prose.

When not writing, Frances loves spending time with her family, fangirling, and planning her next vacation.

Frances Fowlkes, originally a northern mid-westerner, now lives in the southeast with her ardent hero of a husband, three playful and rambunctious boys, and one spoiled standard poodle.

Win a $25 Amazon Gift Card during the tour.