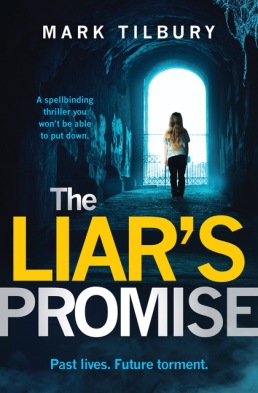 Do you love dark & compelling psychological thrillers? Mark Tilbury’s unmissable The Liar’s Promise is a suspenseful thriller which will have you gripped.

How does a mother protect her child from the unknown?

During a visit to a local theatre, four-year-old Chloe Hollis becomes hysterical. But her mother, Mel, doesn’t realise that this is just the beginning of the nightmare. In the coming weeks, Chloe talks of The Tall Man – Of death.

At her wit’s end, Mel confides in Charles Honeywell, the headmaster at the school where she works. But what Mel doesn’t know is that Charles is linked to what is happening to her daughter.

Will Mel learn the terrible truth? And can she overcome her own tragic past and save her daughter before it’s too late?

The Liar’s Promise is a story of past lives and future torment.

After having read Mark Tilbury’s other novels, and swayed by the masses of advance praise for The Liar’s Promise, I was very curious to read this new standalone thriller. I was drawn to the tease of past lives combined with murder, as well as knowing Tilbury’s writing style.

Other reviewers have said this is a gruesome novel, but I must be immune to literary violence because I didn’t find it overly shocking or morbid (gotta wonder what that says about me!). The novel mainly focuses on Chloe’s experiences, as seen through the eyes of her mother and those around her. She is basically a catalyst for a spirit trying to reach out. Peter King, a twisted theatre owner with an obsession with Shakespeare, is the villain of the piece. I found him to be a very well written, complex individual—one of the more unique serial killers I have read about. Among the never-ending flow of crime novels, he does stand out, which is high praise.

After reading Abattoir of Dreams, there were elements of The Liar’s Promise that fell short for me, not to say it wasn’t a good read. The reader is treated to glimpses of King’s victims, which did intensify the horrific nature of his character, however, after the halfway point, we are left wondering what happened to them as the rest of the action centers back on Chloe. This is solved, but I felt like that emotional connection to empathize with his victims was missing.

Readers who enjoy crime novels and thrillers will find Mr. Tilbury’s latest offering interesting and perhaps even thought provoking about what happens to us after we die.

Get your copy of A Liar’s Promise on all Amazon marketplaces!