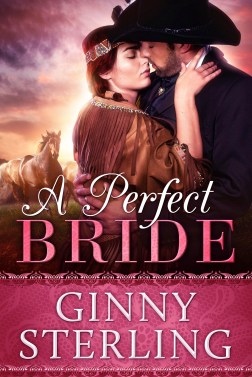 Orphaned as a child, feisty Colleen O’Mara is discovered by the Cherokee people and adopted as one of their own. She becomes a sister to the chief’s only daughter. Learning their ways, she teaches them her language in return. As the United States Army uproots them from their homes, she is fascinated with the dark-haired lieutenant that has come to her rescue as they are forced to make the treacherous journey to the Oklahoma Territory.

Lieutenant Daniel Williams is among the soldiers called up to enforce the removal of the Cherokee people from Georgia. It only took one glance into Colleen’s pale green eyes amidst the chaos to become fascinated with the so-called Indian maiden. Feeling guilty over what is happening to the Cherokee and his love for the enchanting young woman, he abandons everything he had once known in order to make things right for his perfect bride.

** Note: Each book in The Bride series is a standalone book, in a mini-series, and you can read them in any order

As many of my readers know, I do have a strict review protocol as it were when it comes to historical novels. I’m a huge proponent of research and keeping the reader in the period. As this is a topic of interest to me, I was excited to read A Perfect Bride by Ginny Sterling. The blurb and cover were quite captivating, well-written to draw the reader in with just enough tease. A lovely combination.

I was very pleased with the beginning of the novel. It was crafted beautifully, where the reader could feel the distress of the native tribe as they were forced to move, the heartbreak and the concern.

However, the latter half of the story fell short to me. There were a couple times I sat thinking, would this be a realistic depiction of what might happen? I know with historical romance, we are allowed some leeway in regards to how we interpret history, but it was simply too rushed. There were also some aspects that had me pulled from the story, namely a description of Little Fire (Colleen) smelling Daniel’s aftershave on a scarf after he had been on a trail with them for many weeks. While I do know aftershave existed in the time period, it threw me out of the story because it felt too modern.

However, despite these things, taking the book on a whole, it is a good representation of the genre and well-written with no grammatical or spelling errors. Therefore, I would recommend it for someone wanting a taste of the era with a HEA ending.

Ginny Sterling is an avid romance writer. She enjoys telling tales that tug at the heart. She enjoys reading and creating stories that leave the reader smiling, laughing or crying. She mostly writes Western Romances Books – including two new series: Brokken Road Romances and The Lawkeepers. She also writes Contemporary romance, as well as the Timeless Brides Series (Time travel romance).

Having lived in several different parts of the United States, she and her family have settled in Kentucky. She spends all of her free time writing, quilting, or shopping for coffee mugs to add to her collection.

If you want spicy romance, check out Gina Cole, her pen name that writes steamy Contemporary and Time Travel romances with a flair for the happily ever after. The Timeless Brides series is a fun, outlandish, group of sexy books that are designed to delight and surprise readers.

Find out more about Ginny Sterling at: http://www.ginnysterling.com